Feel free to join and chat and scrap along with us!
Posted by Jessica at 10:29 AM 2 comments: Links to this post

I am the worst card maker.  I have some kind of crazy mental block when it comes to them.  They announced a card making class and Scrap Chicks for this month and I decided that I'd give it a go.  Well, it went pretty well and I actually even like some of the cards I made :)  Check these ones out...

Hope you're finding lots of inspiration this summer!

Posted by Jessica at 9:51 AM No comments: Links to this post

The scraproom: A work in progress

A video from today of my room now that I've spent a couple of days working on it :)
Posted by Jessica at 2:14 PM 2 comments: Links to this post 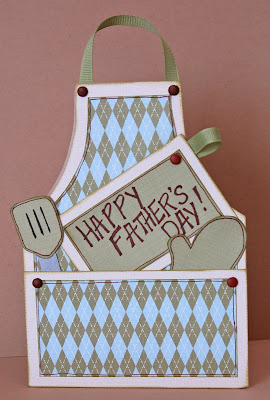 I hope everyone is having a great Sunday!  We have plans to go see my Dad and my Grandpa over at my parents' house today for Father's Day.  Some swimming and some visiting and it should be a great day!  My husband chose what he wanted for breakfast and dinner (and even ran out for doughnuts for those of us that don't like bacon and eggs).
A friend made this card and shared it, so of course I wanted to make one too.  How cute is that?  She found it first at Playing with Paper.  I'm giving this one to my Grandpa.  He always prints out special cards for everyone for their birthday and Christmas, so I thought I'd make him a little something too.
Have a great day!
Posted by Jessica at 1:02 PM 1 comment: Links to this post

I posted on Facebook the other day that I made a layout and I liked it :)  That doesn't happen with every layout I make!
This one was based on a sketch for the Helmar June challenge.  I don't own any Helmar goodies, so I can't enter their contest, but I loved the sketch so I thought I'd go ahead and use it! 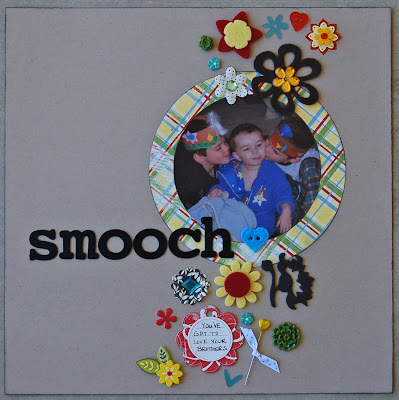 I don't usually like the look of photos cut into shapes, but I think the circle looks really cute here.

I hope you're having a great weekend!
Posted by Jessica at 8:44 AM 2 comments: Links to this post 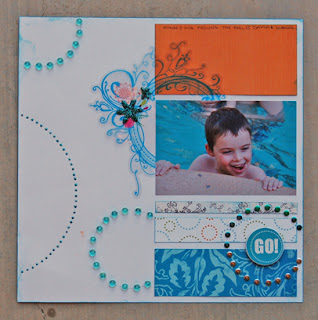 This is another challenge layout from a Scrap Chicks summer challenge.  We only have an hour and 20 minutes to make the layout and get it posted online.  I totally started late again :) but I still managed to get it posted just in time.  Now, the pencil marks I used for my circles still need to be erased, and I'm sure I'll have to go back and add more to it because it's just not one of my layouts unless I go crazy on it, but here it is :)
I do really like the sketch and I think I'll be using it again!
Posted by Jessica at 10:07 AM No comments: Links to this post

Over at Scrap Chicks they're doing a weekly challenge.  Last week we had and hour and twenty minutes to do up a layout using a sketch we were given.  We were warned about how many pictures we would need, but that was about it.
Well, I got started late and didn't actually turn the layout in on time, but it's still pretty cute and I had a lot of fun playing along. 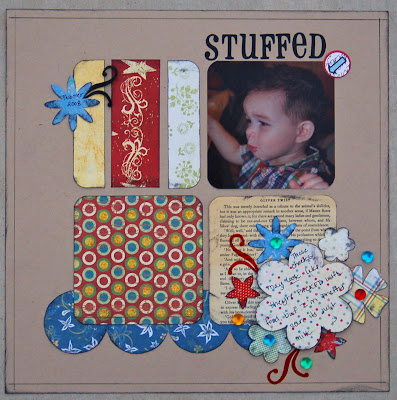 A little bird even told me that she was going to use it for an inspiration of the day over at Sassy Lil' Sketches.  How cool is that?
Here's to hoping that I can get my layout done in time this week! :D﻿
Posted by Jessica at 10:00 AM 1 comment: Links to this post

I still had my spring wreath up until earlier this week and I decided it was time for an update.  I had already replaced the flowers that weren't doing very well in the heat and I wanted the rest of my front porch to look nice too so I grabbed some things at Joann's on Thursday. 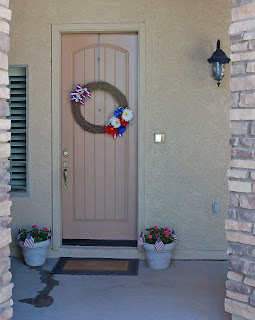 This is what it looks like now!  The wreath is pretty simple and I just made with with things that were on sale at Joann's.﻿

This little sign was half off at Joann's too and it cost me less than $10.  I really like how it looks there.﻿ 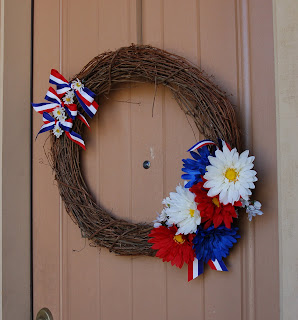 The wreath.  Pretty simple, but I like it.  You can definitely see that red, white and blue when you drive by :)﻿ 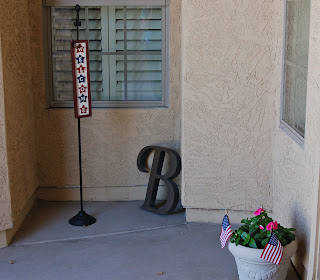 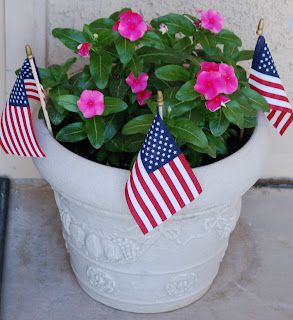 My new (and not dead) flowers!  The flags came three for a dollar at Target.  I bought the moisture control soil and it really seems to be helping.  Everything in the yard has a bubbler, but these are by the door and have to be watered with the hose.  It's nice that they don't have to be watered every single day to keep them from dying.
Well, I hope you like it.  I do!﻿
Posted by Jessica at 9:10 AM 1 comment: Links to this post

Today I thought I'd share some gift bags that I altered for Xyron.  I seem to have a birthday party to go to almost every week this summer.  These bags were very affordable at Target (they were 99 cents to $2-3).  They come in a great kraft color and the ribbon handles were included.  You could easily use your scraps to make these bags for any occasion.﻿ 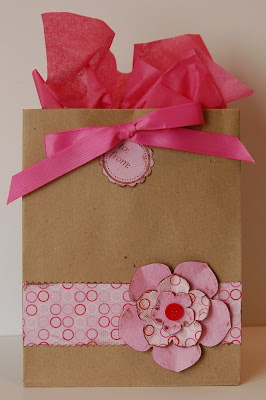 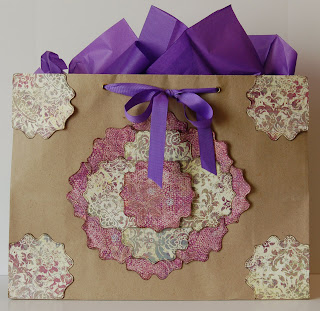 The dies are all by Spellbinders for the Xyron Creatopia.  I really love that flower on the pink bag.  I see lots of those in my future :)  ﻿
﻿
Posted by Jessica at 9:24 AM No comments: Links to this post

Over at Scrap Chicks there's a monthly sketch challenge.  I'm sure that I've said before that I love using sketches when I have some layouts to get done and feel like I'm all out of mojo.  The sketch this month was really cute and I used it right away after it was posted.

And here's what I did with it. 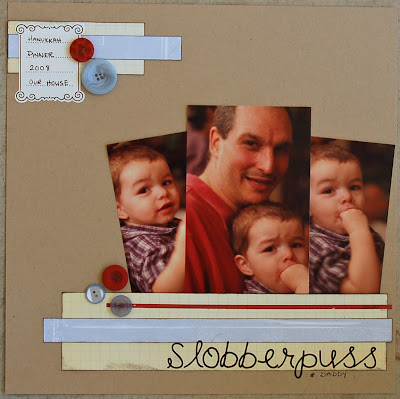 The pictures are actually from Hanukkah a couple of years ago.  (I'm a tad behind on my scrapping if you hadn't noticed).  If you use the sketch, come on over to Scrap Chicks and share it with everyone!
Posted by Jessica at 2:19 PM 2 comments: Links to this post

I do like some pink.  I even have pink hair right now :)  I don't get to use the color very often in my scrapbooking, but when I scrap for a friend of mine I get to work with pictures of her super cute little girl.
I did this layout last week.  It was fun and I got to use some papers from Basic Grey that I got a great deal on over at the Scenic Route store. 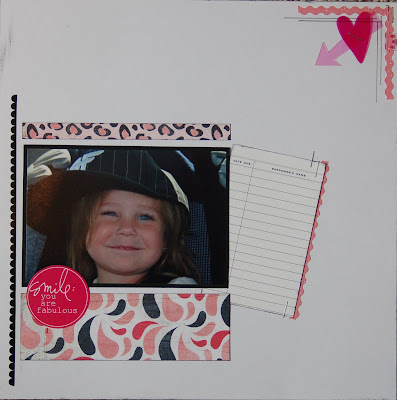 I hope you like it and that you're getting a lot of time to be creative this summer!
Posted by Jessica at 9:42 AM No comments: Links to this post

I have some exciting news!!

I'll just come right out and spill the beans...

I've been asked to be the Design Team Coordinator for Gel-a-Tins stamps!  I am just so excited to get to work with the great people and products and I can't wait to get started.
I'll be working on some fun stuff to be happening soon and I'll keep you all posted so you'll know when it's time to go check it all out and blog hop and win some goodies!
For now, though, I'd really appreciate it if you'd go check out the Facebook page and like us!  Projects and contests will be shared over there too so it's a great way to stay on top of what's happening.
I'll be back soon with some of the things I've been working on lately for myself and for Xyron.  Things were a little crazy around here with the end of the school year and art classes and general wacky stuff, but I'm back! :)

Posted by Jessica at 6:05 PM 5 comments: Links to this post 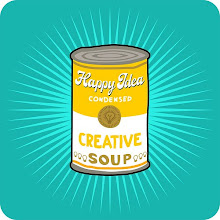